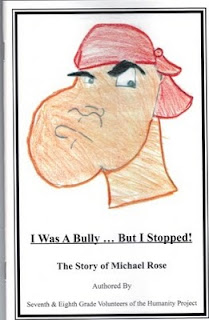 Broward County is no stranger to bullying.  Last school year Deerfield Beach Middle School held the spotlight in the most negative of circumstances.  Starting with Michael Brewer who was nearly burned to death, and several months later the brutal and savage beating of Josie Ratley.

As a community, a group of Broward County middle school students joined together with the help of State Farm, The Broward Sheriff's Office and The Humanity Project to publish two books targeted at combating bullying.

The Miami Herald reported one of the bullying books is about a privileged and selfish character Lucina who has everything she wants but degrades everyone who doesn't share her fortune. The other book is about Michael, who is dyslexic and of black and Asian heritage. He's influenced by his abusive father to bully others.

Students also worked on illustrations and cover art. The books will be used as part of The Humanity Project's innovative Anti-bullying Through the Arts program in Broward during the school year.

Congratulations to all these students and a special thanks to State Farm, Broward County Sheriff's Office and The Humanity Project for stepping up and reaching out to our kids - our future!

Learn more at the www.TheHumanityProject.com.

Watch video and read more.
Posted by Sue Scheff at 7:56 AM