By Justin Patchin and Sameer Hinduja

"Just when you think no one understands, someone does. Words Wounds will open dialogue across the country and the world! Drs. Justin Patchin and Sameer Hinduja share their years of experience and research of the depths of cyberbullying, to give you concrete solutions and tools to navigate today's digital society. Every parent needs to purchase this book for their pre-teen and teen today. Especially in today's society, we need to equip our children with the knowledge and resources they need to combat the underbelly of the cyberspace. Words Wound offers teens helping teens and sound advice and information that other teens will relate to."

Cyberbullying happens every day. Harsh words and damaging photos exchanged through texts, email, or social media can result in humiliation, broken friendships, punishment at school, and even legal prosecution.

In some cases, online harassment has contributed to teen suicide. Faced with this frightening problem, parents, educators, and teens are looking for information and advice. Many books have been written for adults about what cyberbullying is and what to do about it, but nothing has been written specifically for teens to help them to protect themselves and their peers.

Written by the foremost experts in cyberbullying prevention and reviewed by teens, this book provides practical strategies for those who are being cyberbullied, seeing cyberbullying, or who just want to do something to help make their schools a safer and more respectful place. The book includes dozens of real-life stories from those who have experienced cyberbullying, including many who have risen above it to make a positive difference in their schools.

In short, "Words Wound" helps students to be the primary agents of change to "delete cyberbullying and make kindness go viral." Are you ready to join the movement?

Posted by Sue Scheff at 9:25 PM No comments:

Please Love Me (A look into teen suicide)

For as long as she can remember, 17-year-old Peyton Bound has struggled to remain strong despite being lost in the whirlwind of her emotionally disturbed mother’s life … then she finds Matthew Adler at a frat party. He’s the first boy who kisses her with open eyes; Peyton finally sees herself in their sparkling reflection.

She’s sure that her fairytale moment has finally arrived, the day when everything will magically fall into place, and the burdens of her disturbing childhood will begin to lift. But when everything goes wrong, Peyton can no longer run from the truth about herself. Something is missing, and no one can save her.

Artist and writer Penelope Przekop grew up in Louisiana during the 1970s and 80s. Despite fictional elements, Please Love Me is her memoir; she is Peyton Bound, a character she created as a young adult to understand how she fell into a destructive relationship that led to a suicide attempt, and violent public cry for help.

As she wrote the book, she realized it was about much more than first love gone wrong. It was about her dysfunctional childhood, her mentally ill mother, and her desperation to break free. Please Love Me gives a raw voice to some of the deepest issues contributing to teenage suicide. It is an honest look into the human spirit's need for love and truth in a world full of craziness, and just how far some will go to find it.

Learn more here.
Posted by Sue Scheff at 10:26 AM No comments: 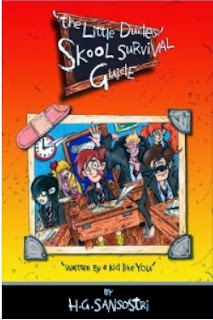 This book is 'The Anti-bullying Guide' that manages to deliver a witty, sarcastic and sensitive read, on how to deal with 'Your Bullies' it is also written by a child.

It's realistic and full of wisdom, considering the authors age (only 11 years-old).

The two book stars 'Billy and Ethan' bring the book to life with their different scenarios of 'Skool' life, that makes you feel you are there with them.

Billy and Ethan are two delicious characters who make you want to meet and know them again and again, they try their very, very best to get their message across on how to deal with 'YOUR BULLIES'.

Visit http://www.hgsansostri.com/ for more information on this amazing author and his book!
Posted by Sue Scheff at 12:42 PM No comments:

According to an early 2013 report from ComScore.com, Facebook still maintains the lead for American user engagement for a single web site — averaging a minute short of 6.75 hours per user in the month of Mar 2013. While this number is a decline from the same period in 2012 (with an average of nearly 7.25 hours per user), it’s obvious that American Facebook users spend a considerable amount of time on the site — more than any other social media site — revealing facts both mundane and interesting about their lives — facts that might be of interest to other people and companies, including those with ill intent.

In fact, according to a study by Alessandro Acquisti discussed in a TED Talk, American employers often judge job candidates who post to social media more harshly than equally skilled candidates who did not post — regardless of whether posts were negative or positive or not even relevant to the potential employer. How potential employers find your Facebook information about you is beyond  the scope of this article, but we do cover some relevant security and privacy statistics and offer some tips to guard yourself.

Top Five World Governments Requesting Facebook User Data
The following five countries made the most requests to Facebook in the first six months of 2013. (Note: United States data is reported in ranges. In the table below, only the minimum value of U.S. ranges is reported.)
6 Threats to Your Privacy and Security
Using Facebook incorrectly can expose you to a number of threats. Here’s an incomplete list:
Privacy and Security Features
Facebook founder Mark Zuckerberg — who in late 2013 spent an extra $30M buying four extra nearby homes to maintain his real-life privacy — has in the past openly indicated that “privacy is over” and that if he were starting Facebook anew that user information would be public by default. That was nearly three years ago and the company doesn’t seem to have swayed much from that goal. He has also made comments suggesting that Facebook users don’t care about privacy.  Despite this attitude, there are legitimate reasons to maintain your privacy on Facebook and there are ways to do so.
This is not a comprehensive list, but possibly two of the most under-utilized features are “private profile” and friend lists. New Facebook accounts used to be private by default but have since switched to public by default. You need to manually change that setting. As for friend lists, they’re the digital equivalent of social circles. Friends can fall into multiple lists or just one.
15 Things You Should Do To Maintain Privacy on Facebook
According to various reports, teens and adults are being turned down for work due to certain things they’ve posted on their social profiles. To see how potentially embarrassing indiscriminate posting can be, visit weknowwhatyouredoing.com.
Younger children are at risk, too, given the growing number of underage Facebook users. According to figures by the Crimes Against Children Research Center, children in the 10-13 age range are at most risk from online predators — that age group makes for 22% of targets.
Here are some tips for maintaining your privacy and keeping your profile socially acceptable, as well as for protecting your children if they use Facebook.
Check the Facebook Privacy page [https://www.facebook.com/help/445588775451827] for more details on privacy settings.
6 Additional Tips For Protecting Your Children
If you think your child will not join Facebook until they’re older, consider that an Oct 2013 study by Commonsense Media shows that 38% of children under 2 have used a mobile device (smartphone or tablet). By the age of 8, that number jumps to 72%. Kids are comfortable with mobile devices, so the chances of them joining a social media site such as Facebook as a mobile user increases. When you then consider that, as mentioned above, 10-13 year-olds make up 22% of the targets of online predators, and that there are millions of underage users, it’s better to guide your children into proper use of Facebook and other social media than to hope they’ll “be good” and not use such services.
In addition to the general tips above, here are some additional tips for protecting your Facebook-using children.
Also make sure that your children are not doing any of the things in the following list.

10 Things You Shouldn’t Do on Facebook
It can be easy to forget how your security and privacy gets compromised on social media. Of course, if you’re doing “bad” things and posting about them, don’t expect to have your privacy maintained. Even if you’re just under suspicion of having done something illegal, Facebook and other social media sites give access to profiles to crime fighting and government agents in certain circumstances — which you cannot prevent. However, to keep other people from knowing your social business, here are tips for what not to do on Facebook

Posted by Sue Scheff at 7:19 AM No comments:

Heroes are born every day. Reblog if you’re committed to being someone’s hero when it comes to bullying.

Learn more at www.stopbullying.gov
Posted by Sue Scheff at 9:43 AM No comments:

A group of Marin Co teens have started TRUCE to promote Cyber-Kindness.

We support kindness in general, but cyber-bullying is so hard to look away from, so we started TRUCE: