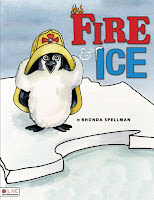 What happens when a very small emperor penguin is faced with a very big decision? Learn that you don’t have to BE big to DO BIG things!

Artos Press began as a way to reach my son. When he was only two years old he began to disappear into an "invisible box" where he couldn't be reached. Words he once spoke disappeared and hollow eyes replaced the bright eyes we adored. When he was eventually diagnosed with an Autistic Spectrum Disorder I had already been researching. When 18 doctors gave me 18 different answers I began to search for a better truth nearly non-stop. Now, after 7000 hours of searching, I share what I have learned with others. By detailing our journey I hope to provide answers and shorten the trip for others. Raising a child on the Autistic Spectrum Disorder is NOT the end of the world. It is only the beginning of a magical journey.

Type the book title in the Amazon box and learn more!