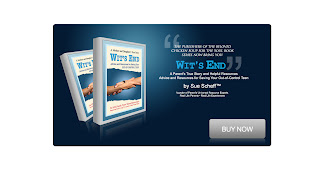 With peer pressure and social influences at all-time highs, many good teens are making bad choices, placing intense emotional and financial strain on parents and families. Lack of motivation, substance abuse, negative peers and gang affiliation are just some of the common challenges facing kids today.

To help address these and other issues, parent advocate Sue Scheff has announced the release of her new book, “Wit’s End: Advice and Resources for Saving Your Out-of-Control Teen.”

Scheff’s book chronicles her painful journey with a struggling teenage daughter and also offers advice, resources and help to mothers and fathers forced to make tough choices regarding their children.

“In the MySpace generation, kids are under more pressure than ever before,” says Scheff, author and founder of Parents’ Universal Resource Experts (P.U.R.E.), an organization that assists families with at-risk children.

“This book will be an invaluable resource and allow parents to learn from my past mistakes,” she adds.

As a single mother in the ‘90s, Scheff struggled to raise her teen daughter, who embraced disturbing friends, beliefs and behaviors. Ultimately, Scheff was forced to utilize a residential treatment facility as a way to instill discipline and structure.

What happened next was chilling -- stories of beatings, sexual abuse, forced starvation and neglect all surfaced from the very facility that was supposed to be protecting and rehabilitating Scheff’s daughter.

In the years following her ordeal, Scheff championed for safe alternatives for at-risk teens and began helping other parents who were facing similar challenges as she once did.

Published by Health Communications, Inc., “Wit’s End” is an extension of the assistance Scheff has been able to provide to families over the years.

“Parents need to know that they’re not alone,” says Scheff. “This book is a much-needed guide to avoid the pitfalls and will ultimately help expedite the healing process.”

About the Author
Sue Scheff is the founder of Parents’ Universal Resource Experts (http://www.helpyourteens.com/ ) and is a sought-after interviewee and speaker on topics such as Internet abuse, struggling teens, cyberbullying and defamation. She has been featured on 20/20, CNN Headline News, ABC News, Fox News, The Rachael Ray Show, Lifetime Television, NPR, BBC Talk Radio and has appeared in the USA Today, Wall Street Journal, Washington Post, Miami Herald and San Francisco Chronicle.
Posted by Sue Scheff at 9:10 AM