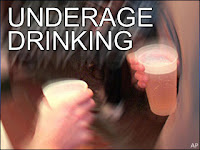 
■Underage drinkers consume nearly 3.6 billion drinks a year - 10 million every day - according to a U.S. Department of Health and Human Services study.