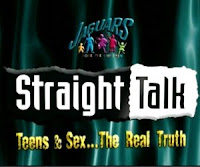 With today's ever expanding Internet and television shows such as 16 and Pregnant, the vast amount of materials that are available to teens today about sex education is tremendous.  There are no excuses for teen pregnancies.  The availability of contraceptives as well as the many resources that are open to teens should help prevent unwanted pregnancies.

Sadly, there are some teens that see having a baby as a tool to keeping a boyfriend or even a way to have someone love them unconditionally.  Without thinking of the consequences, teenagers are not always mature enough to see the full picture of parenthood.  It is not playing house, and it is not a baby doll; Having a baby is a full time job and a massive responsibility.  Some adults have a hard time dealing with being a parent, a teen is hardly ready for this major step in life.

Straight Talk, Teens and Sex of Jacksonville is an organization that is designed to reduce the incidence of teen pregnancy and the spread of AIDS and other sexuality transmitted infections (STI's).
The facts about youth and sexual activity:

As summer is fast approaching, teens will be attending parties, sleep-overs, and just hanging out.  Be sure they are educated on sex, relationships and contraceptives.
Be an educated parent, you will have safer and healthier teens.