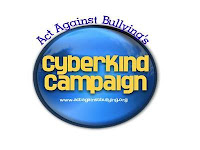 Source: Act Against Bullying
Helping Children who are bullied at school
Against Bullying (AAB) was founded in 2003 by Louise Burfitt-Dons formerly Louise Byres. She is also a director of the The Global Warming Alliance.
Our adviser on criminal law is Detective Inspector (retired) Hamish Brown MBE, retired London Fire Commissioner Brian Robinson CBE and on the effects of bullying are top forensic psychologist Glen Scott Lipson, Ph.D., A.B.P.P., CGP (US), Ivor Burfitt MSc, PhD MBBS and Professor Helen Cowie.
Our physical defence advisor is Grandmaster Sid Sofos, Grandmaster of the Year 2006/2007 American Black Belt Hall of Fame, who has been helping children cut crime in one of London's most deprived areas. We are also supported by Britain's Got Talent Finalist's 2008 martial arts performance team Strike! who are touring schools raising awareness of how martial arts can help develop confidence and improve coping skills.Act Against Bullying founder trustees were Louise Burfitt-Dons, Katherine Scholfield and Margaret Louden Clark. Our current trustees are Mark Garrity, Helen Hewitt and Debra Pearce.
After conducting research during which time she met parents of children who had taken their lives as a result of bullying at school Louise Burfitt-Dons was determined to establish a charity which would help alleviate the suffering and meet the needs of children and parents who face the same difficulties. AAB’s purpose then, and now, is to provide confidential assistance to vulnerable children exposed to bullying and unable to escape their circumstances.

"Bullying can affect anyone, at any age. It causes long lasting psychological damage. It also results in at least 20 child suicides a year. Children will always be the most vulnerable members of our society. Act Against Bullying is the UK’s appointed charity helping children who are bullied at school."

"We are doing this through research into causes, analysis and preventative measures, promotion of the serious affects of systematic bullying through the media, education of public and health professionals, provision of drama material to schools and local community drama groups and promotion of training in anti-bullying provisions for teachers students, parents and carers.

We believe that lack of awareness of the seriousness of the problem, the stigma attached and the repercussions that follow the reporting of incidents has led to the epidemic of psychological bullying that exists in schools today.Within this type of environment children cannot flourish and achieve their full potential during their academic years. We strongly support the Government's anti-bullying campaign.

AAB’s first initiative was to publish a set of monologues for teachers to use in classroom situations highlighting the characteristics of potentially bullying situations normally overlooked by members of staff.

The success of the monologues meant that we were swamped with calls from teachers, parents and children asking for advice on how to cope when in these situations. With the help of many different and diverse authorities we have come up with a whole range of innovative advisory steps for children and parents and are continuing to research new initiatives.We have received an overwhelming response to our positive advice and encouragement.

Building on the success of the AAB monologues and our advice centre, the AAB has become involved with a number of incentives to counteract the growing problem within our society. The Cool to be Kind™ Campaign with its simple message ‘Don’t be rude, Don’t exclude, Don’t push in, Don’t hurt to win’ is up and running and has met with enthusiasm and encouragement from all. We have been invited to speak at Forums and address schools. We have established our web presence and have begun to attract partners and supporters both commercially as well as in the voluntary sector. We have received sponsorship and donations from businesses, individual and schools.

Our current work is focused in three areas; public awareness through our Cool to be Kind campaign and our web site, education of school children, teaching personnel and social workers by way of advisory material, talks and research into the causes of bullying. We are attracting offers from other youth organisations to work in conjunction with themselves and are actively pursuing partners in the self-defence and martial arts areas in order to further our work in the most cost effective and efficient way to help as many vulnerable children as possible as quickly as can be achieved.

In our work Act Against Bullying is seeking to help children that find themselves the unwitting targets of the bullying at school. These young people can be victims for a plethora or reasons as indiscriminate as is the random nature of our evolving society.Your support in our venture will provide the moral and financial necessities required to restore their faith in the world that belongs to all of us."