Refused to Be Broken 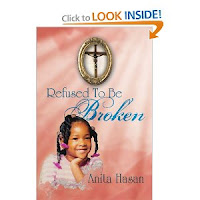 Nicole Kennedy grew up without ever knowing her father. Her mother on the other hand made her feel like she was not loved. The only place she found love was in the house of her grandmother, the wise woman whom she called Big Mama. At six, Nicole learned that her mother was raped, thus her conception.

Despite this shocking revelation, she still had the urge to look for the one man that had been missing in her life. Nicole would have to endure physical, emotional, and verbal abuse that went on for several years even into adulthood. Amid the trials and tribulations, Nicole mustered the courage to move on with faith. She lived life with her grandmother’s reminder to always stay resilient and to always trust in God.

Refused to be Broken chronicles how Nicole endured the different tragedies in her life, but she chose to never give up. With God’s help, she was never broken.  It is about strength, never giving up, and having faith even at times when there is nothing tangible or intangible to believe in. Written to inspire others, this book is for anyone who has lost all hope and feels close to being broken.

Order on Amazon today!
Posted by Sue Scheff at 11:48 AM