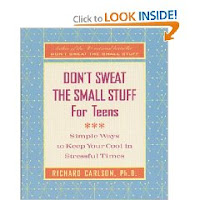 Don't Sweat the Small Stuff for Teens: Simple Ways to Keep Your Cool in Stressful Times (Don't Sweat the Small Stuff Series)
By Richard Carlson
Richard Carlson has written numerous books encouraging folks not to "sweat the small stuff", and his title for teens is as warm, wise, and witty as his previous works. His tone is one of an older family friend who manages to advise while still maintaining the minimum level of coolness that teens require from those who intend to guide them into adulthood.
Type the title in the Amazon box and learn more!
Posted by Sue Scheff at 8:56 AM